Named the #9 fastest growing education company in the United States. Thank you for your support!

You're using an unsupported browser. Quimbee might not work properly for you until you update your browser.

What is the Multistate Bar Examination? The Ultimate Guide to the MBE

Passing the Multistate Bar Examination (MBE) is an essential step toward becoming a lawyer in most states. Learn more about the exam format, tested subjects, registration, and other crucial details.

According to the NCBE, the purpose of the MBE is to assess the extent to which an examinee can apply fundamental legal principles and legal reasoning to analyze given fact patterns.

The MBE is divided into morning and afternoon testing sessions of three hours each, with 100 questions in each session. There are no scheduled breaks during either the morning or afternoon session, though test takers typically may be excused from the exam room during the test. Be sure to check on this with your jurisdiction, as the rules regarding leaving the exam room may vary.

The MBE is administered in 49 out of 50 states (as well as the District of Columbia, Guam, the Northern Mariana Islands, the United States Virgin Islands, and the Republic of Palau). Louisiana and Puerto Rico are the only United States jurisdictions that do not administer the MBE. (To learn more about the bar exam in those jurisdictions, please see our pages for Louisiana and Puerto Rico.)

The states and jurisdictions that administer the MBE are:

The NCBE offers an MBE subject matter outline for each tested subject that further details the contents of the exam.

Preparing for the MBE

The MBE is an exam that requires a great deal of preparation. Below are some of the most important things to keep in mind when preparing for the MBE.

How Hard is the MBE?

Many bar examinees consider the MBE to be the “easy” part of the bar exam. After spending a day writing essays, filling in circles seems like a breeze. This is a mistake. Although the physical requirements of the MBE may not be as demanding as those of the Multistate Essay Examination (MEE) (or other, jurisdiction-specific essay components), the MBE might be the most mentally draining component of the bar exam. Every answer choice on every MBE question is designed to make you consider the relevant rules, exceptions, and exceptions to the exceptions. When taking the MBE, you have to think through every nuance of a question, and you have to do it 200 times.

Each question on the MBE is followed by four possible answer options. As mentioned earlier, the MBE is unlike most other multiple-choice exams you’ve taken. Each answer choice is potentially a trap, and you should not expect to be able to immediately rule out answer choices. Passing the MBE requires both broad knowledge of the relevant legal rules and the stamina to maintain critical thinking over six hours of testing.

When Do I Need to Start Studying for the MBE?

It’s generally recommended that you start studying at least nine weeks before the bar exam. If you’re graduating in May and sitting for the July bar exam, you should take about a week off postgraduation to unwind from the semester and then get right into studying. If you’re not able to study full time, you’ll likely need to start studying even sooner—likely before graduation.

Here are a few of the top tips for studying for the MBE:

When you sign up for Quimbee MBE Review, you’ll take a diagnostic practice exam made up of real, licensed MBE questions. You’ll then spend the next few days concentrating almost exclusively on drilling through MBE practice questions and reviewing the answer explanations. Quimbee’s MBE review course culminates with a full-length, simulated MBE. When students complete the course, they’ll unlock their performance-statistics page. This page is a prescription of the most important MBE topics for which the student has the least proficiency, and students can use it to remediate their knowledge by focusing on these topics in the final few days leading up to the exam.

With all these resources, it’s easy to see why Quimbee MBE Review is the best tool available to help you pass the MBE.

The MBE is scored on a scale ranging from 0 to 200. MBE scaled scores are calculated based on a process known as equating, in which MBE raw scores on the current examination are adjusted to account for differences in difficulty as compared with past examinations. For more information on this process, please see the NCBE’s website.

Your MBE score is based on the number of questions you answer correctly, and points are not subtracted for incorrect answers. So, it’s in your interest to answer every question on the MBE, even if you’re guessing.

The NCBE provides a number of statistics regarding MBE scores. Here are a few of the most notable statistics: 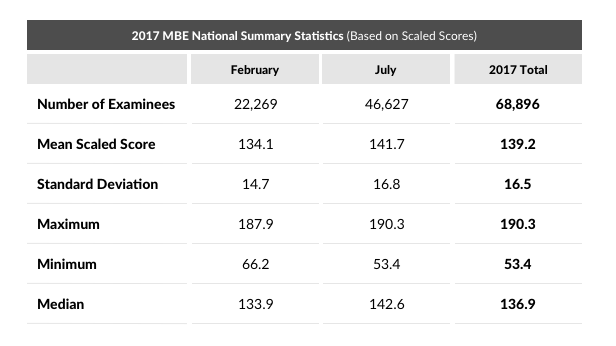 Become a member and get unlimited access to our massive library of law school study materials, including 670 video lessons and 4,700+ practice questions in 1L, 2L, & 3L subjects, as well as 15,900+ case briefs keyed to 219 law school casebooks.

The operation could not be completed. If you logged out from your Quimbee account, please login and try again. If not, you may need to refresh the page.